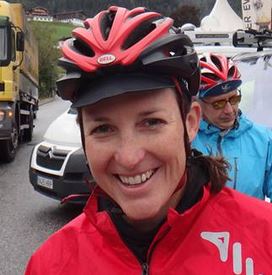 Congratulations to Belinda Ward on being selected as Reddog’s Athlete of the Month for February 2014. Well done!!!

She wins the award for her outstanding performance at Goondiwindi.

A big thank you to Endura, Aquashop, No More Knots, Active Stride and GMN Vegie Prepi for donating this month's prizes.

A bit embarrassed right now! You've caught me in the middle of a motivational ebb and I'm feeling guilty about missing a few training sessions since Goondiwindi. I guess this should be a kick in the pants to get to a few more Reddog sessions so people aren't thinking "who's that?!"

I like the camaraderie at races like Goondiwindi and Byron Bay where every second person on course is a Reddog. And that people race hard, but also party hard afterwards. I like that the “old-timers” are happy to share their experience, and that you can’t necessarily tell who the elite athletes are until you look up the results.

If I was coach I hope I’d turn up a bit more consistently! I’d like to reschedule so that we swim in the mornings and run in the afternoon/evening, and you could be sure that every swim set would involve a pull-buoy or flippers.

I’ve had a few big weeks with 25-30 hours of training (mostly on the bike) over summer, but will be getting a little more focused (particularly on running) from now until June, which means shorter sessions of higher intensity.

5. Lease favourite session and why?

Swimming in winter. I don’t do cold. Actually just swimming - particularly any time we do stroke-count or a time-trial because I don’t like being reminded of how much I still suck.

That everyone (myself included) could remember to be kind a little more often.

“Only those who will risk going too far can possibly find out how far they can go." - T.S. Eliot

Resist the urge to race Ironman too soon – or even at all. Ignore anyone who asks “when are you going to ‘step up’ to race IM?” Ironman is over-rated and boring, and bad for relationships. Also, you are never “too old”.

This year I’m chasing a medal at the world duathlon championships in Pontevedra, Spain. I’m also hoping to run my first ultra-marathon - 56km on the Yurrebilla Trail through the Adelaide Hills where I grew up.

Someone who doesn’t think it’s crazy to spend all day on the bike, or to go for a run in the middle of the night. Perhaps someone who makes my swimming look good. (Did I just describe GB?)

Professionally I’m a project manager for CSIRO’s Autonomous Systems group (we make robots). But I'd like to retire and spend more time riding my bike in the mountains in Europe and tasting the local wine. I’m currently renovating my house, and have just signed a contract to build another.

12. What's your one guilty pleasure?

I avoid riding in the rain as a safety issue, so sometimes I’ll wake up and check the BOM radar hoping for a legitimate excuse to turn off the alarm.