Congratulations to Darren Carnell on his selection as Reddog’s Athlete of the Month for October 2012. Well done!!!

Darren wins the award for winning the Sprint Distance World Championships in the 40-44 Age Group.

A big thank you to sponsors The Aqua Shop, No More Knots and Ben McCormick from All Hose and Valves for donating this months’ prize. 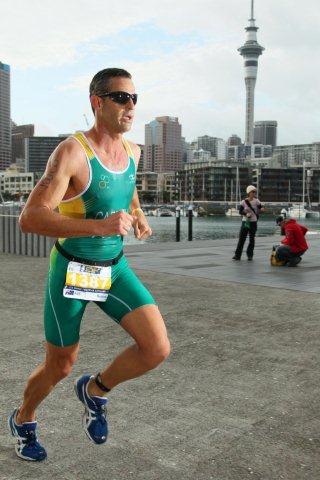 Humbled knowing how many good performances there were in October. I was really pleased. I hadn’t won athlete of the month for any sport since I was a swimmer in Commercial Club in 1992.

2. What attracted you to the squad?

A whole bunch of reasons: Trent’s chats every time I would train at the Valley, training with an ex pro Fossie (Peter Foster), the only way to get a 50m swimming lane at the Valley Pool, the opening of the M7 (perfect for living at Stafford Heights) and training with athletes that can beat me.

Enough to do a good effort in a sprint triathlon and probably only enough to get to the end of an Olympic distance race needing a drip.

The discipline of self-control because I hate saying no to Krispy Kreme donuts and tubs of Ben and Jerry’s Chunky Monkey. Even though running is my weakest leg, I really love the challenge of getting my time down.

To know which cyclist really deserved to have those Yellow Jersey’s hanging in Armstrong’s games room.  Secondly, I have to say the wish to win the Age Group Sprint World Championships was sweet. In my mind it was unfinished business as I only competed once before in a World Championship and that was in 1994 (18 years earlier) in the 20-24 age group. I crashed 5km into the bike leg and couldn’t finish.

“Nothing tastes as good as skinny feels.” This was said many times as a joke leading up to Worlds amongst my colleagues at work when I had to lose some bulk and all I really wanted to do was eat sugar and fat. The reward was worth it though with my work colleagues putting on a surprise ice-cream party the day after Auckland.

8. What advice would you give to other Reddogs who would like to be crowned Age Group World Champion?

Sacrifice is worth it. The ice-cream is even better when you haven’t tasted it for a while.

9. What do you do outside of triathlons?

You might be expecting me to say, eat ice-cream but I also eat chocolate: white, milk and dark; lollies; donuts and if there is any spare time after work, triathlons and eating, I like watching AFL (from four generations of Cats supporters), reading, writing and playing the keyboard.

Someone who enjoys the camaraderie, loves the competition and is encouraging so it doesn’t matter who is the fastest as long as we give everything and have nothing left. I think I’ve found a good bunch of guys recently, some from Reddog, who fit this description of my ideal training partners.