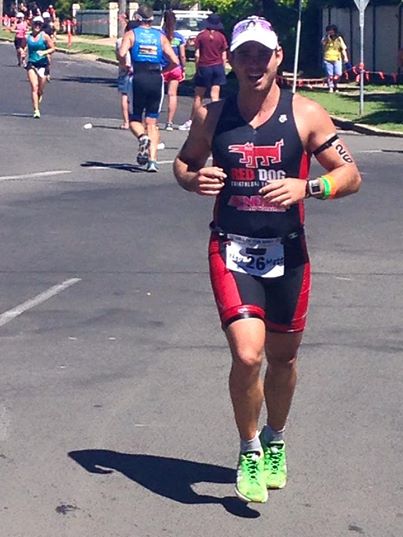 Congratulations to Ned Mott on being selected as Red Dog’s Athlete of the Month for January 2015.   Well done !!!

Ned wins the award for his outstanding commitment in entering and racing Goondiwindi Hell of the West in memory of his close friend, Tom Lyons, who passed away at the event last year.

A big thank you to Aquashop, Queens Arms, All Hose and Valves and The Brow Bar for donating this month’s prizes.

1: Red Dog AOTM, how do you feel about that?

It feels awesome and I'm very privileged considering the standard of athletes who train with Red Dog.

2: What attracted you to the squad?

The main reason I joined was I made the goal of finishing Hell of the West in memory of one of my best mates Tom Lyons who passed away at the event last year. And so I could watch Trent on the bus on the way home from Gundi.

3: If you were Red Dog coach for the week, what would you do differently?

Make it compulsory for David Savoff to wear a shirt.

4: How much training do you do at the moment?

Just had a week off after Gundi but leading up to it I was doing 8-9 sessions a week.

5: Least favourite session and why?

At the start it was hands down swimming because I was absolutely hopeless but now I actually enjoy it. Actually that's a lie I would definitely say swimming.

The mind is everything. What you think you become. - Buddha

Focus on the journey, not the destination. Joy is found not in finishing an activity but in doing it. - Greg Anderson

8: What advice would you give to other Red Dogs who would like to be AOTM?

I know it's pretty clichéd but consistency and discipline I think are two key attributes to achieve anything but particularly in triathlons. If you can set a goal and have those two things I think you will do a lot better than most.

Now that gundi is done I'm going to work on my swimming because it's definitely the worst leg so I'm going to do the aquathon and some open water swims and then aim to do the Byron Olympic.

10: Who would be your ideal training partner?

Everyone, I think that's one of the awesome things about Red Dog is that whether you are having a good day or a bad day there will always be someone there to push you and make you work harder.

11: What do you do outside of triathlons?

Nothing beats going for a surf and spending time on the coast but I'm also a country boy at heart so I like heading bush with mates.

12: What's your one guilty pleasure?

Rocky Road, burgers and turning up late to swimming so I miss half of the warm up.