February Athlete Of The Month 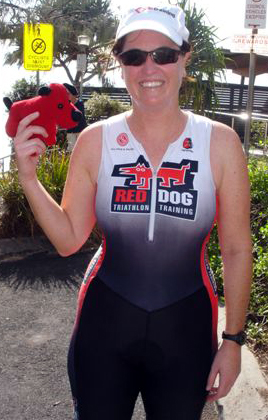 What possessed you to compete in the Rottnest Channel Swim?

Actually it was my third time, first two times I was in a team of 4 (2000, 2006). I had been thinking about doing a duo (2 people) in the past but it wasn’t until Trent suggested I try a 5km swim in October last year that I thought it might be possible. My sister had been overseas for a couple of years and was heading back to Perth, seemed like good timing.
How far was it?

19.7km if you can swim in a straight line with no deviations

How long did it take you?

How did you manage to swim that long without heckling the coach?

Well I did get Dean to send you a text around half way.

How many sessions a week were you doing?

Swimming it was at least 2 sessions mid week and one long session on a Saturday (average of 6km), with regular  run and cycle sessions to keep it fun.

Did you see any sharks?

Nada. Fish count was one stingray and too many jellyfish. The leader (4 hours 40 mins) reckons he saw a baby great white, I think he was dreaming.

Would you do the Rottnest Channel Swim again?

Definitely. It’s a huge day on the Perth social calendar, a great location, good atmosphere. I’d be mad not to!

Should Suzie Maroney re-think her comeback now you’re a force to be reckoned with in long distance swimming?

Suzie tried the Rottonest swim once and stopped after about 3km because she got stung by jellyfish. I think she should stick to selling her life to women’s magazines.

Most enjoyable race and why?

My very first Olympic triathlon, Mooloolaba (05) because of the massive high you get from finishing your first ever. The Rottnest swim this year was fantastic, great preparation, beautiful weather, lovely to share it with my sister and family, a great weekend all round.

If you were the Reddog coach for a week what would you do different?

I think the coach does a pretty good job all round but maybe more time for chat between sets ?

Who would be your ideal training partner?

Anyone who is prepared to have a good chat, particularly important during long bike rides/runs

Which age grouper do you admire and why?

Janine (The machine) Wilson. She does it all with her busy life. I tried to stay on her feet in my last triathlon start she left me for dead!

Do you boss Deano around as much as the people in lane 6?

What was your all-time pick up line and did it work?

I haven’t tried one in over 7 years my memory isn’t that good these days but I guess it worked ; )

Do you think male triathlete's should go back to racing in sluggos and singlets?

It works for Brad Bevan, but as a general rule NO

Your partner (Deano) made an appearance at your last training session. Was that to keep the groupies away?

Hehe, I think he just wanted to spend time with you Trent ;-)

What would be your advice to other Reddog’s who would like to be athlete of the month?

Buy Trent presents but seriously, set yourself a goal event, chat to the coach about the best way to prepare and then put in a few months of solid training. Aim for something you think is slightly beyond your limits - so much satisfaction when you achieve it!

Who do you think in the squad is hot right now?

Anywhere there is a bunch of happy Reddog’s.

If you had one wish?

Not much point in wishing for things, you have to make them happen.